​At Gallatin Timberwrights, we trace our history not just to the founding of our company – but to the age-old craft of Timber Framing.

Timber framing has been in use in America and Northern Europe for centuries – and the first timber-framed structures were built in America in 1637. Many of them have endured to this day, which proves the durability and longevity of properly-framed timber homes.

Understanding The History Of Timber Framing In America

Timber framing has been used in countries around the world for thousands of years. In the past, using rough-hewn timbers was the only method by which homes could be constructed. There were no precision saws that could create smooth, slim 2x4s and other modern materials.

Historically, though, timber framing in America traces back to the British. The historic British traditions and techniques of cruck framing, jettying, and others which were used in 17th-century Britain made their way to America.

In America, braced timber-frame homes were the traditional form of housebuilding from the 17th-century to the early 20th century, when more modern building techniques like balloon framing became more common, due to industrial production of common building materials.

The Present – Honoring The Tradition Of Timber Framing

But at Gallatin Timberwrights, we’re proud to honor this age-old tradition, by continuing to use this age-old method of wood construction. We use modern, precision joinery techniques and high-quality heavy timbers to create spectacular results.

Our timber framing projects are functional, structurally sound, and aesthetically-pleasing – whether you’re building a commercial property, or a single-family home, Gallatin Timberwrights is here to help.

Compared to modern buildings, timber framed buildings are longer-lasting, and have a distinctive, rustic appearance that simply cannot be imitated.

The Future Of Gallatin Timberwrights – We’re Adaptable, Expeditionary, And Reliable

We believe that excellence does not come from pre-built plans and stodgy traditions. We honor those who come before us by using a lean, efficient, and expeditionary approach to building – one that allows us to be flexible, and create high-quality, custom projects.

So, while our history stretches back for hundreds of years, we do not fear change. We look forward to the future, and what it holds for our company. We embrace it – and we plan to keep building timber-framed structures that will stand the test of time.

To learn more about the history of timber framing in America, and get more details about what we do, feel free to contact us online, or give us a call.

We’re always happy to talk to potential customers – and discuss how we use the best of modern technique and age-old traditions to create spectacular homes and buildings that will endure for generations. 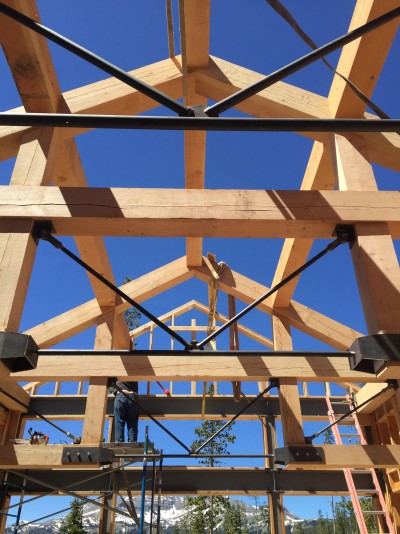